- JP: Some of the world's largest crude oil buyers said on Thursday that they are considering using strategic oil reserves after multiple sources told Reuters that the United States requires coordinated action to cool global energy prices. Since Wednesday, oil prices have fallen by about 4%, and this shock therapy seems to have worked. According to several people familiar with the matter, the Biden administration of the United States has asked the world's largest oil buyers, including China, India, and Japan, to consider releasing crude oil reserves. The United States made this unusual request when economic activities rebounded from the trough at the epidemic's beginning, pushing up gasoline prices and other consumer costs. President Biden was busy coping with the political pressure that this brought. After the US government asked some major crude oil buyers to release natural oil reserves, US crude oil and Brent crude oil futures fell. U.S. President Biden U.S. asks major crude oil buyers such as China, India, and Japan to consider releasing natural oil reserves. The yellow line represents Brent crude oil futures, the blue line represents US crude oil futures, and the white stripe represents US gasoline futures. The move by the United States also reflects the disappointment of the United States with the Organization of Petroleum Exporting Countries (OPEC) and its oil-producing allies. They rejected Washington’s repeated calls for accelerating the increase in supply. Sources told Reuters earlier that in recent weeks, Biden and his senior aides have discussed the possibility of a coordinated release of oil stocks with close allies, including Japan, South Korea, India, and China. China’s State Reserve Bureau said on Thursday that it is working on releasing its crude oil reserves. However, it declined to comment on the United States’ request for major oil-consuming countries to consider coordinating the release of oil reserves. An official from the Japanese Ministry of Economy, Trade, and Industry said that the United States had asked Tokyo to deal with high oil prices. Still, he could not confirm whether this request includes the coordinated release of reserves. The official said that by the law, Japan could not reduce prices by releasing funds.

- Cherkizovo reduced its net profit by 45.9% YoY in Q3 2021 to RUB 2.5 billion. The company's costs grew faster than the prices of its main products.

- In the third quarter of 2021, Bank Saint Petersburg increased its IFRS net profit by 1.5 times y / y. This was facilitated by a reduction in reserves and an increase in lending activity. In the third quarter of 2021, Mechel reduced EBITDA by 5% QoQ, while net debt / EBITDA fell to 3.2x. Weakness in the company's performance was more than offset by favorable market conditions.
- The free cash flow of Gazprom Neft increased by 11% QoQ in Q3 2021 to RUB 180 billion. The company took full advantage of the favorable market conditions. Nvidia's results for the third quarter of fiscal 2022 are well above expectations. A good report is driven by solid demand for chips from the video game segment and data centers
Baidu reports mixed 3Q2021 results, double-digit revenue, and customer base growth coupled with management's flimsy forecast for the next quarter.
- JD.com's strong Q3 2021 report reflects the company's resilience to regulatory pressure. Revenue and active customer base growth remain in the high double-digit area.

- China and Hong Kong Apple concept stocks rose in early trading on Friday. Cowell Electronics once rose 11.4% in intraday trading and closed more than 7% in early trading; shares of the well-known "fruit chain" company Goertek rose 9.6% to a record high and closed up about 5 in early trading. %. Earlier reports said that Apple is speeding up car development projects and shifting its focus to self-driving cars.
- Luxshare Precision once rose 7.5% in early trading and ended up 3.6% in the early trading; Lens Technology closed up more than 4%; Tianyin Holdings, Dongshan Precision, Xinwangda, and BYD Electronics closed up 0.8-2% in early trading between.
According to Bloomberg News on Thursday, citing people familiar with the matter, Apple is working hard to accelerate the development of its electric vehicles and shift the project's focus to fully autonomous driving again. According to the report, the company strives to be listed as early as 2025.
- Apple's US stocks closed up 2.85% on Thursday, with a total market value of US$2.59 trillion, which also enabled it to surpass Microsoft and become the world's most valuable company again.

- Oil remained in the red but attempted to gain a foothold below $ 80 per barrel of Brent have not been crowned with success. The main risk remains the likelihood of coordinated oil sales from the strategic reserves of the largest importers. However, while the US approaches this issue quite freely, the representatives of Japan and South Korea emphasized that they do not have the legislative opportunity to sell oil to reduce prices. The very fact of the US appeal is not denied. China confirmed that it was considering the sale of oil from reserves but, according to Reuters, left without comment a possible connection with the US appeal. In the short term, coordinated sales may collapse oil quotes, but it is also worth remembering that reducing strategic reserves makes these countries more vulnerable to force majeure. Brent - $ 79.85 (-0.54%), WTI - $ 77.01 (-0.70%), Aluminum - $ 2598 (-0.71%), Gold - $ 1866.1 (-0.22%), Copper - $ 9360.86 (-0.47%), Nickel - $ 19,230 (-0.65%).

Nvidia's quarterly report far exceeded expectations. Revenue grew by 50% y / y to $ 7.103 billion ($ 6.8 billion was expected). Adjusted: EPS rose 60% YoY to $ 1.17 ($ 1.10 expected). At the same time, the gross margin increased by 150 bps—YoY to 67%. The company's business showed strong growth in both main areas: the gaming segment increased revenue by 42% YoY to $ 3.22 billion; revenue from data centers increased 55% YoY to $ 2.94. The results highlight that the company remains a leader in graphics for gamers by implementing ray-tracing and artificial intelligence (AI) for maximum realism. The demand for graphics chips from the gaming segment is especially high ahead of the holiday season, which further fueled the results. Strong results in the data center segment also emphasize that the company is increasing its market share, mainly at the expense of Intel. The automotive segment in the future may become an additional driver of growth as uncrewed vehicles are widely adopted. This segment brought in $ 135 million in the third quarter (+ 8% YoY) or 1.9% of total revenue. The semiconductor business remains quite cyclical, so the company seeks to improve chips and obtain more recurring licensing revenue, which usually gives the business a higher value estimate. The company announced the strategic concept of "Omniverse," which involves the creation of client avatars to perform various kinds of actions in the virtual space. Using "Omniverse" powered by Nvidia graphics chips (GPUs) in the cloud could open up a new source of licensing revenue. Implementation and revision of "Omniverse" may take a lot of time, but existing technologies already allow us to discuss it quite seriously. 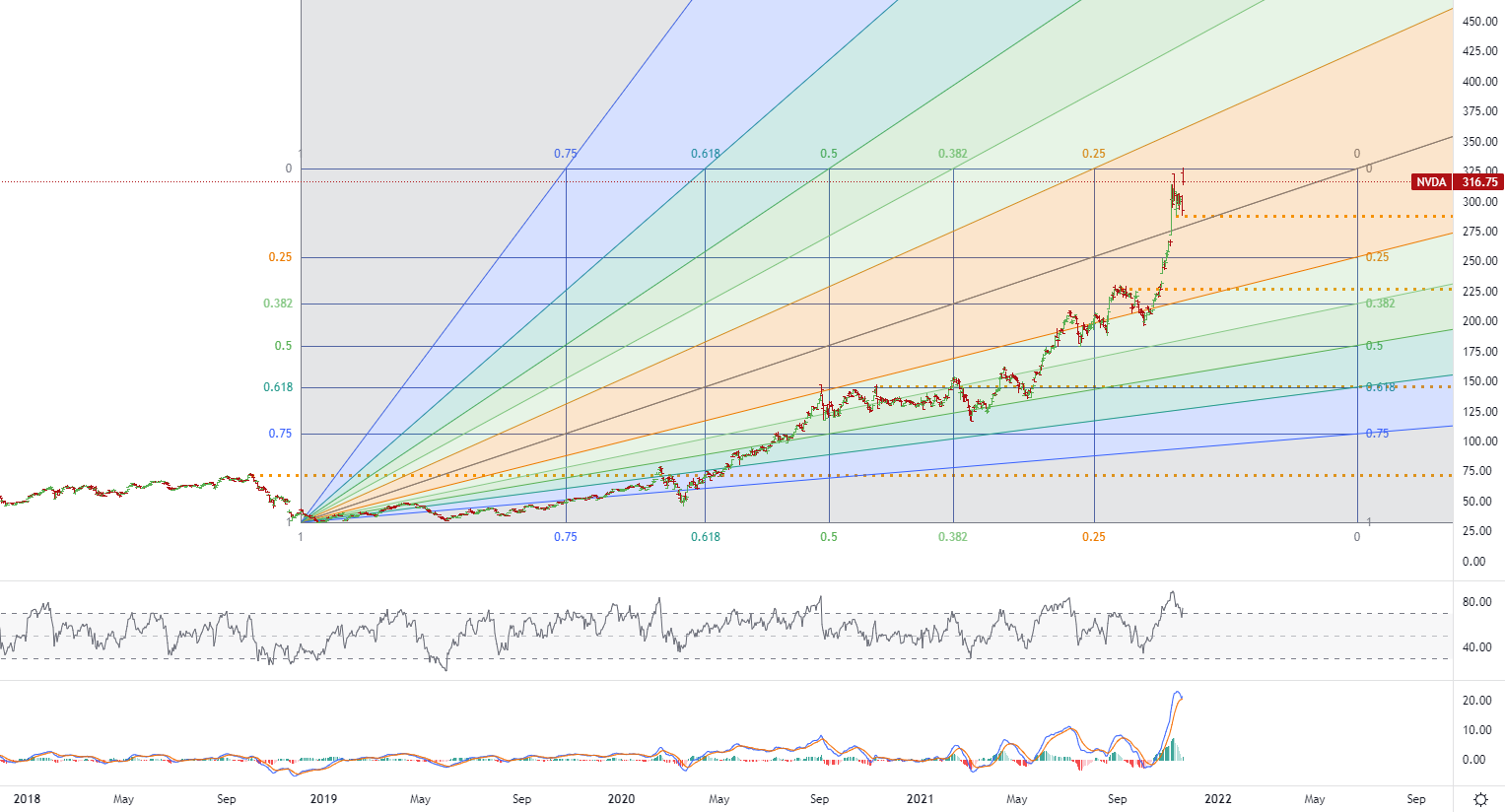