- US: In the week ending October 2, the number of new applications for unemployment benefits in the United States fell from the previous seven-week high of 364,000 to 326,000, lower than market expectations of 348,000. As the job market continues to show signs of recovery and the impact associated with the summer peaks of Hurricane Ida and Delta Variations begins to weaken, the number of applicants is approaching the pandemic low of 311,000 reached in early September. In addition, once on non-seasonal adjustments, California (a decrease of 10,500 people), the District of Columbia (a reduction of 40,000 people), Michigan (a reduction of 3,200 people), and Texas (a reduction of 31,000 people) saw significant declines in claim levels.

- US: US employers announced 17,895 layoffs in September 2021, slightly higher than the 15,723 in August and the lowest since June 1997. Nevertheless, the total in September was still 85% lower than the same period last year. As in August, companies in the healthcare/products sector (2673 companies) are cutting expenses. Considering the third quarter, employers announced 52,560 layoffs, which is the lowest quarterly total since the second quarter of 1997. So far this year, employers have announced plans to cut 265,221 jobs from their payroll, a decrease of 87% from last year and the lowest total for the first nine months on record.

- EU: The minutes of the European Central Bank’s September monetary policy meeting show that the European Central Bank believes that it is appropriate to moderately reduce the rate of net asset purchases based on PEPP for the rest of this year, given favorable financing conditions and improved inflation prospects in the medium term. Despite this, policymakers have discussed more drastic cuts in asset purchases, and some even believe that the market has predicted that the stimulus plan will end by March 2022. At the September 2021 meeting, the European Central Bank also raised its growth and inflation forecasts for this year. The inflation rate in 2021 is 2.2% (estimated at 1.9% in June), 1.7% (1.5%) in 2022, and 1.5% (1.4%) in 2023. Regarding growth, the Eurozone economy is expected to grow by 5% (vs. 4.6%) in 2021, 4.6% (vs. 4.7%) in 2022, and 2.1% (vs. 2.1%) in 2023.

- EU: In August 2021, France's trade deficit narrowed to 6.67 billion euros from 7.08 billion euros revised upwards last month. This is the most significant deficit since August 2020. Exports increased by 3.7%, driven by other industrial products (4.2%); transportation equipment (6.2%). Mechanical equipment, electronic equipment, computer equipment (1.8%), agricultural, forestry, and fishery products (15.0%). Geographically, sales to the EU have increased (3.9%); European countries outside the EU (3.5%); and Asia (14.1). At the same time, import growth slowed by 2.3%, mainly for other industrial products (1.7%); machinery and electronics and computer equipment (2.3%); and food (1.4%), while transportation equipment fell (-0.2%). Offset the growth. Among the major trading partners, upward pressure comes from the European Union (2.7%), the Americas (1.0%), and Africa (25.7%).

- UK: From April to June 2021, the UK labor productivity, measured by hourly output, increased by 0.1% quarter-on-quarter, compared to a preliminary estimate of a decrease of 0.5%, after a revised increase of 0.6% in the previous three months. The textile, clothing, and leather industries experienced the most significant increase in productivity (10.1%), followed by machinery and equipment (9.5%) and rubber, plastics, and non-metallic minerals (3.5%). However, the productivity of chemicals, pharmaceuticals (down 12.3%), and transportation equipment (down 8.7%) dropped significantly. The output per worker increased by 5.2% month-on-month.

- JP: Japan's index of leading economic indicators shows that in August 2021, the index fell to 101.8 from the final 104.1 of the previous month. The index measures economic conditions in the coming months and is compiled using data such as employment opportunities and consumer confidence. This is the lowest level since February because the government is trying to control the increase in cases of the delta strain despite the low vaccination rate.

- JP: Preliminary data shows that Japan's economic indicator index over the same period, composed of a series of data such as factory output, employment, and retail sales, fell from 94.4 the last month ago to 91.5 in August 2021. Since February, this was the weakest data when the continued interference caused by the coronavirus forced the government to extend and expand the state of emergency across the country.

- AU: The Australian Industry Group’s Australian Service Performance Index rose slightly by 0.1 points from 45.6 in August to 45.7 in September 2021. The latest data show that the service industry has contracted for the second consecutive month.

- The yield on the benchmark U.S. 10-year Treasury note fell back to 1.51% on Thursday and hit 1.56% at the beginning of this week, the highest level since June 16. Energy prices, including oil and natural gas, have fallen from recent highs, alleviating some concerns about soaring inflation. Nevertheless, as the economic recovery continues, it is more and more likely that the Fed will gradually decrease next month, and yields are still rising. In addition, the ADP report shows that the private sector has added the most jobs in three months. All eyes are now on the employment report released on Friday, which is expected to show that the labor market recovery is still strong.

- General Motors (GM) shares rose 3.5% as the company set a goal to double its revenue by 2030 from $ 140 billion to $ 280. GM sees the leading way to achieve this in developing new products such as the unmanned Cruise, the electric delivery van, and software. - According to the company's forecasts, revenue from software and data processing alone could reach $ 20- $ 25 billion. This is an entirely new approach for traditional automakers, in which there is a clear desire to repeat Tesla's business model and thereby increase margins.

- Twitter (TWTR) shares up 3% as the company struck a deal with AppLovin to sell its MoPub division.
- Nikola (NKLA) shares rose 5% after announcing a partnership with TC Energy to build and operate hydrogen hubs in the US and Canada.
- Aspen Technology (AZPN) shares up 7% after Bloomberg News reported that Emerson Electric is in talks with the company about a possible merger.
- BioNTech SE (BNTX) shares gained 3%, while Pfizer (PFE) shares rose 2% as companies filed with US regulators to declare their vaccine suitable for children aged 5-11.
- Faro Technologies (FARO) shares rose in price by 8%: Needham raised its recommendation on the security from "hold" to "buy."
- Lamb Weston (LW) shares declined 7% after a weak quarterly sales report.
- Levi Strauss (LEVI) shares up 7% after solid quarterly reports and higher forecasts.
- Loop Industries (LOOP) shares up 10%: HC Wainwright upgrades its rating to Buy from Neutral.
- Marvell Technology (MRVL) shares rose 4% after Investor Day, where the company raised its long-term growth forecasts.
- Square (SQ) shares up 3%: Jefferies analysts said investors "must" own the stock.

- CAD: The Canadian dollar/U.S. dollar exchange rate hovered around 1.26, a level that has not been seen since September 6, supported by news that the United States, which bought about 75% of Canada’s exports, has avoided national defaults. The U.S. Senate Minority Leader Mitch McConnel proposed a short-term suspension of the U.S. debt ceiling, ending the deadlock leading to a government default. In terms of data, Canada’s August trade surplus rose to 1.94 billion Canadian dollars, higher than the market’s forecast of 4.3 billion Canadian dollars. Exports increased slightly by 0.8% to a record 54.4 billion Canadian dollars.

- OIL: Level $ 80 / bbl. On Brent looked like strong resistance at the beginning of the week. However, events are developing quite rapidly. On Thursday, quotes for North Sea grade futures were already testing the round mark for strength as support. It is very positive that the attempt to go below $ 80 found increased demand, which allowed to resume growth and returned quotes to $ 82 / bbl. The price decline was driven by fears of a price war on rumors that the United States could print out strategic oil reserves to stimulate price reductions after OPEC did not decide to backtrack early this week and will continue to increase production by 400 thousand per month. Barrels per day. However, the US Department of Energy later said it did not use the strategic reserve to help contain gasoline prices. The bullish sentiment in the market was further supported by a report by Moody's Investors Service. Exploring companies need to increase their budgets by 54% to more than half a trillion dollars to prevent significant supply shortages in the next few years. Brent, $ / bar. - 81.86 (+ 0.96%), WTI, $ / bar. - 78.11 (+ 0.90%), Urals, $ / bar. - 80.27 (+ 1.06%).

The U.S. dollar index remained almost unchanged at 94.2, still close to its highest point in a year. The market expects the Fed to gradually reduce its stimulus measures from November and start raising interest rates next year. At the same time, the ADP report shows that companies have added the most jobs in three months, and Friday’s employment data is expected to show that the labor market is still recovering strongly. In addition, the U.S. Senate seems to be close to reaching an interim agreement to avoid a federal debt default in the next two weeks on the political front. The Democrats said before that they might accept the Republican proposal to resolve the partisan deadlock threatening the overall economy. 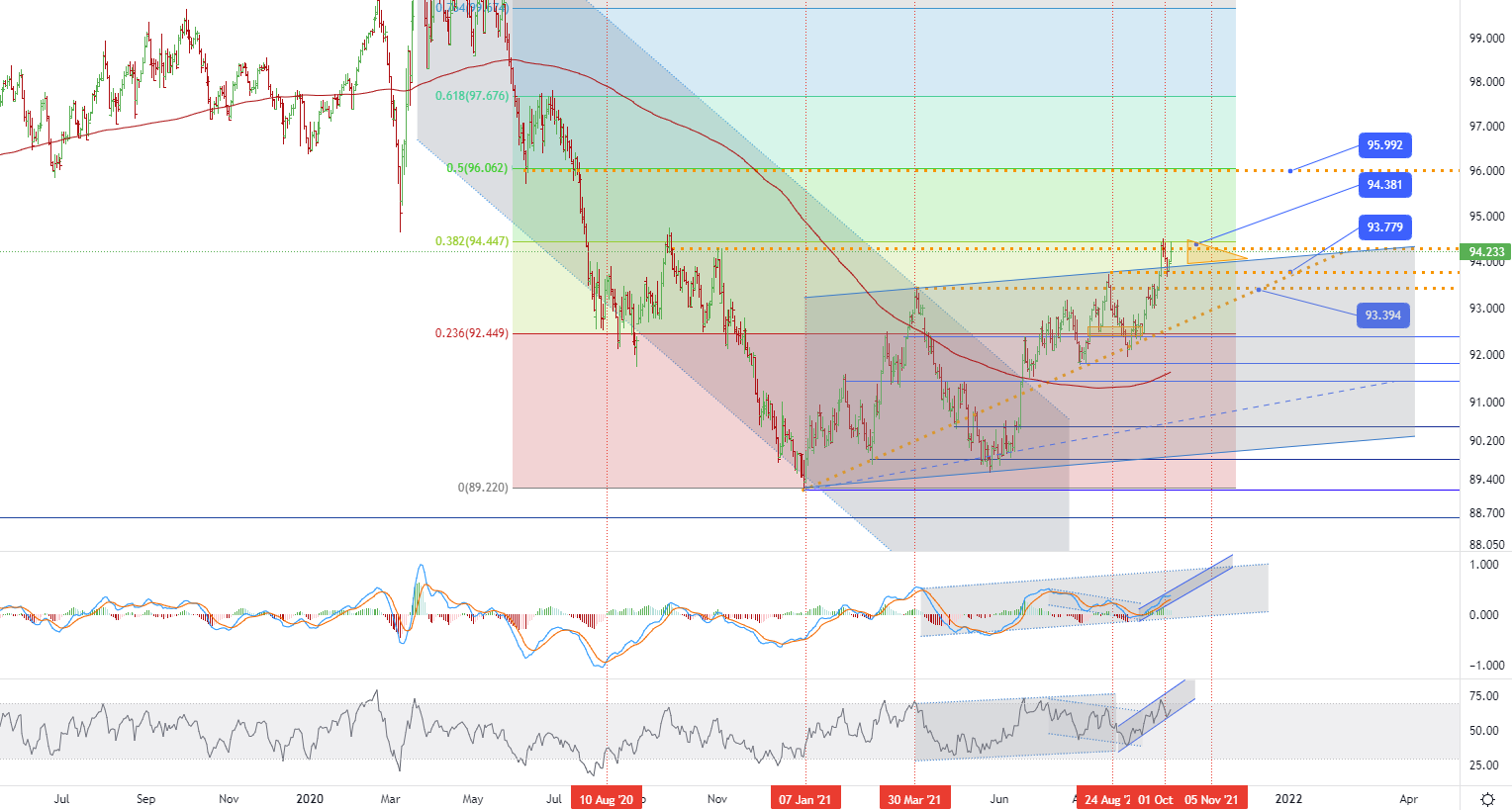