- US: The US stock market rallied within 1% on the news that US President Joe Biden had selected Jerome Powell as a candidate for the post of Fed chairman, and now he must be approved by the Senate. Powell's first term at the head of the regulator ends in February 2022. In addition, the second contender for the post, member of the Fed's Board of Governors Lael Brainard, received a nomination from Biden for the post of vice-chairman of the Fed. Investors liked these decisions based on market dynamics (S&P 500 and Nasdaq Composite hit new record highs).

- US: US President Biden nominated Powell to be re-elected as chairman of the Federal Reserve for another four-year term and nominated the current director Brainard as the vice-chairman. The nomination still needs to be confirmed by the Senate. Biden said that when the economy is facing huge potential and huge uncertainty, the stability and independence of the Fed are needed. Powell used facts to prove the independence of the Fed chairman that he valued and withstood unprecedented political interference in the previous administration. To successfully maintain the integrity and credibility of the Federal Reserve, I believe Powell is the right person to lead the recovery of the United States after the epidemic and fight inflation. Biden also said that the nomination of a Republican as chairman and a Democrat as vice chairman is because he believes that it is essential that the leadership of the Federal Reserve have broad bipartisan support, especially in a politically divided country. Powell said he understands that high inflation will bring losses to households and uses tools to support the economy and a strong labor market to prevent inflation from rising and becoming stable.

- RU: The Board of Directors of Norilsk Nickel recommended approving interim dividends for nine months of 2021 in the amount of RUB 1,523.17 per share. January 14, 2022 - date of determination of the right to receive dividends. The meeting of shareholders is scheduled for December 27. Currently, the dividend yield on Norilsk Nickel shares, based on all dividends paid over the last 12 months, is 7.5% (12-month dividend yield). The indicative dividend yield (based on the previous dividend on an annualized basis) is 14%, considering the share price of RUB 21,716. At the time of calculation. The projected dividend yield for 2021 implies 4% per annum and 4% per annum for 2022. The forecast dividend yield for the current year is 11.7%, and for 2022 - 10%.

- EU: The mood in Europe was quite positive. The telecoms sector was among the leaders on news that Ericsson is buying cloud services company Vonage for $ 6.2 billion. Telecom Italia rose almost a quarter on the back of KKR's offer to purchase. The offered price per share of 50.5 euros is more than 45% higher than the closing price of trading on Friday. Finally, Telenor agreed to merge the telecommunications division with the Thai Charoen Pokphand Group. The market value of the deal is about $ 8.61 billion.

- EU: German caretaker Chancellor Angela Merkel said that current measures are not enough to curb the spread of the new crown virus, and more forceful actions must be taken to deal with it. Merkel told party leaders at a meeting of the Christian Democratic League that the country is in a dramatic situation. Whether implementing the current measures or increasing the vaccination rate, it will not be enough to prevent the rapid rise in cases in the short term, calling on 16 federal states. Before Wednesday, take strict measures to deal with it. The authorities earlier decided to restrict most public activities in areas where hospitals are crowded with confirmed patients, and only those who have received injections or recovered are not limited. In addition, about 79% of adults across the country have received two doses of the vaccine, but only 7.5% of them have received booster doses. Another 30,643 confirmed cases and 62 patients died in Germany on Monday. Health officials have warned earlier that it is not ruled out to follow Austria's example and take measures to close the city again.

- JP: The Japanese government is considering the sale of oil from strategic reserves. However, as early as last week, the Japanese authorities responded to the United States in the sense that, according to the legislation, they have no right to use strategic reserves to influence prices. However, Prime Minister Fumio Kishida said last Saturday that he is ready to help the United States in the fight to reduce oil prices. Citigroup analysts believe that the total volume of oil from the strategic reserves of several countries may amount to 100-120 million barrels, including 45-60 million barrels. American funds and 30 million bar. Chinese. The share of Japan and South Korea in this operation is estimated at 10 million bar. from each country. However, the most unpleasant for oil could be a series of quarantine measures in Europe. Austria has gone into a nationwide quarantine since Monday. Similar efforts are being considered in Germany, Holland, France. If this happens, the market will naturally reduce consumption.

- Astra Space (ASTR) shares rose 43%, a record high since February 2, after the company announced that its rocket had entered orbit.

- Xpeng (XPEV) shares up 6.2% as the company unveils a new SUV that could compete directly with Tesla's Model Y and Nio's ES series.
- Rivian (RIVN) shares declined by 7.9%: Ford Motor (F) abandoned plans to develop an electric car jointly with an American startup.

- As a rule, in the week after Thanksgiving, the American market demonstrates positive dynamics. President Joe Biden will also name the next candidate for the Fed chairman this week. As the current head of the regulator Jerome Powell, and the manager Leila Brainard, they can become.
- On Tuesday, President Joe Biden will talk about the economy and fighting inflation. Accordingly, we can expect requests from the Fed for a stricter policy. Otherwise, trading during the week with Thanksgiving is at lower volumes and less volatility.

- This week, on Wednesday, it is expected to publish the minutes of the last meeting of the FRS on the interest rate of November 3. Investors' expectations about the transition of the regulator to faster actions to roll off quantitative easing and raise the rate are growing.
- Rating agency Moody's downgraded Trinidad and Tobago's sovereign credit rating to Ba2 from Ba1However, we believe Trinidad and Tobago sovereign yields are broadly in line with the market in the BB + composite rating category.
- Fitch has upgraded Seychelles' credit rating to B + and set the rating to a stable outlook. In our opinion, Seychelles Eurobonds may be of interest to risk-averse investors in the short-term investment horizon.
- As reported on Friday, "Rusnano" held a meeting with creditors and major bondholders about a possible restructuring of obligations. Talk about a possible restructuring of the state company's debts is a potentially severe blow to investors' perception of all quasi-government bonds.
- The Euro was the weakest currency in the G10 on Monday. Lockdowns exert pressure on the single currency in Europe and the difference in the rhetoric of the ECB and the FRS representatives.

- In general, the situation in the global foreign exchange market was calm. The Turkish lira tried to break its weakening period and return to 11.0 per dollar. The Polish authorities' statements that the migration crisis on the border with Belarus could be a prelude to something more nightmarish kept the zloty close to a 12-year low against the euro. The European Commission has also begun to study the feasibility of further providing EU funding for Poland and Hungary. Finally, the traditional risk currencies AUD and NZD were gaining ground. The Reserve Bank of New Zealand is expected to raise rates on Wednesday, 24 November. The dollar reached a new 16-month high against the euro. US President Joe Biden nominated Jerome Powell for a new 4-year term at the head of the Fed. Lael Brainard will be vice-chairman. The retention of the former head of the Federal Reserve is positive for the dollar, as the markets considered Ms. Braindard to be a more pronounced "dove" than Powell. The activity in the forex options market implies more and more bets that the EURUSD rate will fall to 1.1000 in the coming months. The ruble tried to strengthen in the morning but then began to weaken just as rapidly. Similar factors apply to the Russian currency as to the stock market. The only thing is that the prospect of growth in rates is a short-term negative for the ruble. After the rates stabilize, the ruble will become noticeably more attractive. Anyway, net long ruble positions on the Chicago Futures Exchange rose 9% over the past week. 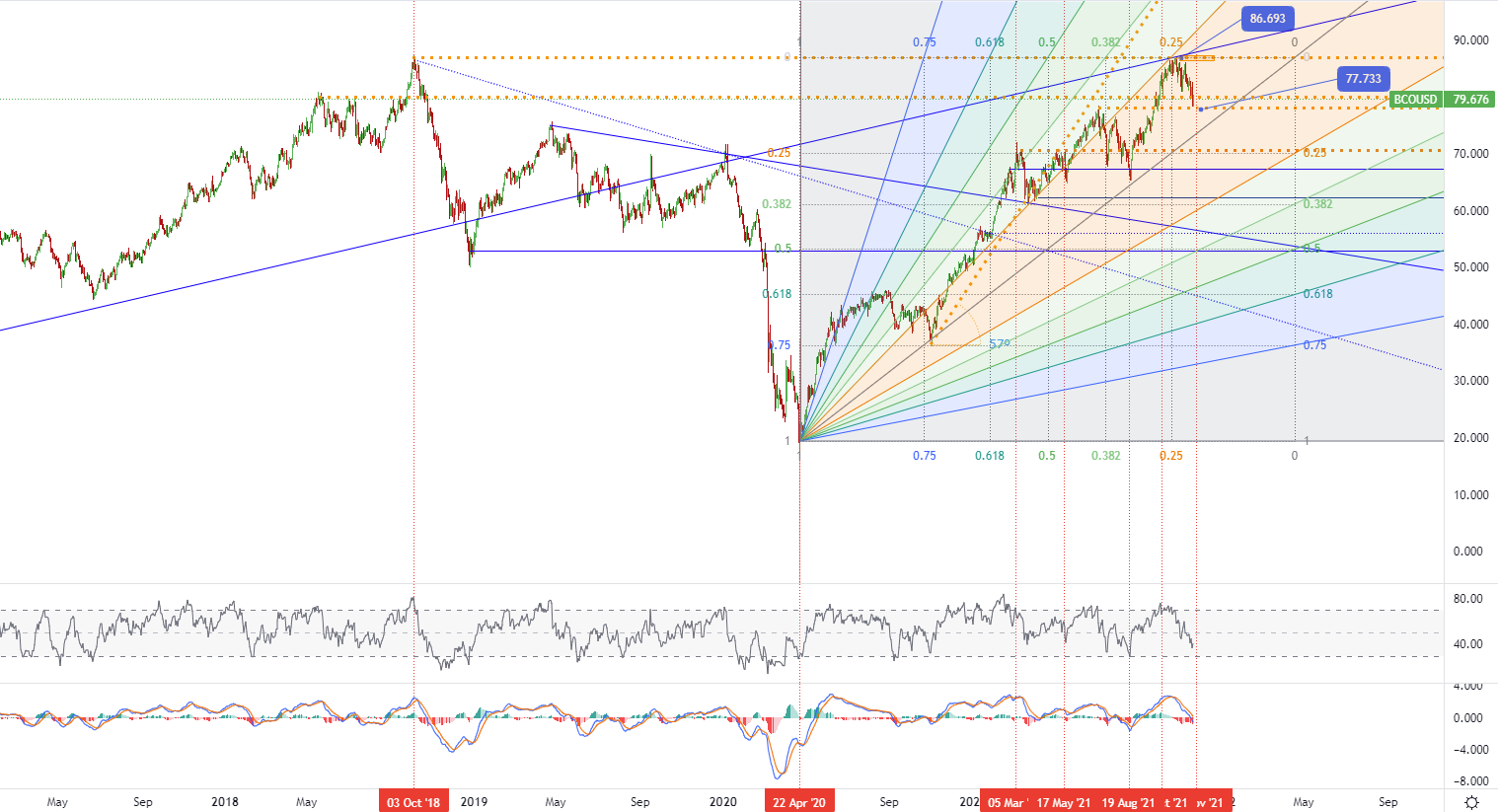