- HK: According to the prospectus, as of June 30, 2021, Himalaya's revenue in the first half of the year was 2.51 billion yuan, a year-on-year increase of 55.5%. The monthly active users of all scenarios have reached 262 million, including 151 million monthly active users of IoT and other third-party platforms. . Tencent, China Reading, Baidu, Xiaomi, Good Future, and Sony Music are strategic investors in Himalaya.

- HK: Yunnan Water announced on the Hong Kong Stock Exchange that the company is considering a possible spin-off of Yunnan Solid Waste Investment Co., Ltd. and independent listing on a stock exchange recognized by the People's Republic of China. Yunnan Solid Waste is currently a wholly-owned subsidiary of the company, directly holding shares. It is principally engaged in solid waste treatment project investment, solid waste treatment technology, and equipment research, development, and consulting.

- HK: Tencent Holdings announced on the Hong Kong Stock Exchange that it would buy back 220,000 shares today at the cost of 105 million Hong Kong dollars at a repurchase price of 471.2-480.2 Hong Kong dollars.

- US: This Thursday, the US Department of Commerce will release August retail sales data. Analysts believe that this data will show the impact of rising prices and the rapid spread of new crown delta strains on consumer spending. On average, the market expects August retail sales data to fall by 0.8% year on year. The data for July was a decrease of 1.1%. The market is still paying attention to the prospect of tax increases in the United States. This week, the Ways and Means Committee of the US House of Representatives will discuss raising the corporate income tax rate from 21% to 26.5% and raising the minimum income tax rate for overseas corporate profits from 10% to 16.5%. It is expected that lawmakers will also propose to raise funds by expanding the enforcement of the Internal Revenue Service, possibly including tax increases for companies and high-income individuals. Democrats in the House of Representatives are also considering increasing the maximum capital gains tax rate from 23.8% to 28.8%, increasing the maximum tax rate for those with an annual income of more than $400,000 from 37% to 39.6%; and imposing an additional tax for those with an annual income of more than $5 million. 3% additional tax.

- EU: At a meeting attended by the Italian Minister of Health Speranza and the Commissioner of the New Coronary Pneumonia Epidemic Emergency Committee, Ferriolo, the Italian government decided to vaccinate the immune-compromised population with the third dose of the new crown from the September 20 vaccine. The Italian New Coronary Pneumonia Epidemic Emergency Committee stated that the Italian Ministry of Health has begun coordinating with the central regions to determine the population standards for vaccination, update system information, and prepare nationwide vaccination. To this end, the emergency committee will reserve more new crown vaccines.

- EU: Economic-sensitive sectors, including banks, automakers, oil and gas, and construction and materials, rose from 0.8% to 1.2%. Last week, the European Central Bank raised its growth and inflation forecasts for this year and beyond, as the euro area economy recovers faster than anticipated. The German pet supply retailer Zooplus AG increased by 7.8%. After Hellman & Friedman raised its takeover bid to EUR 3.29 billion (USD 3.89 billion) on an initial offer of EUR 3 billion. Associated British Foods decreased by 2.2%, with quarterly sales to Primark lower than forecast, but it raised its profit outlook for the entire year.

- GB: On Sunday, the Scottish National Party (SNP) held an autumn meeting. It was proposed at the meeting that Scotland should have a second referendum on whether to leave Britain. The leader of the National Party, Sturgeon, said that a referendum will be held when the new crown epidemic is "controllable," no later than the end of 2023. British Prime Minister Johnson stated that he would not approve a referendum in Scotland again. However, the Secretary of State for Scotland said that if polls show that 60% of Scots want a referendum, the British government may allow the referendum.

- The three major US stock indexes collectively opened higher. The Dow rose 0.66%, the Nasdaq rose 0.59%, and the S&P 500 index rose 0.69%. Large technology stocks generally rebounded. Apple rose by more than 1%. Previously, in response to the Epic ruling, the business model will not change.

- US stock futures rose strongly, and the prevalence of risk appetite became a key factor supporting the risky currency, the Australian dollar. However, thanks to the Fed’s expectation of announcing its balance sheet reduction plan, as the US dollar is broadly strengthening, the exchange rate’s upward trend lacks support.

- CAD: The US dollar/Canadian dollar was still on the defensive before the European market, and the trading was dominated by shocks in the day, which is currently hovering around 1.2675. The combination of different factors failed to help the US dollar against the Canadian dollar profit from the strong rebound of more than 110 points last Friday, resulting in the suppression of price movements or narrow fluctuations on the first day of the new week. West Texas Intermediate (WTI) prices rebounded above US$70 per barrel, supporting the commodity-related Canadian dollar. However, the overall strength of the U.S. dollar provided some support for the U.S. dollar against the Canadian dollar and helped limit any meaningful decline.

- AUD: From a technical point of view, the recent decline of the Australian dollar against the US dollar since the highest level since mid-July stopped at the 38.2% Fibonacci retracement level of the substantial rise of 0.7106-0.7478, which coincides with the 200 SMA in the 4-hour chart due to economic data. Light, this bit should now constitute a critical pivot point. At the same time, the Japanese chart's technical indicators have stabilized in the positive zone but have been struggling to gain any meaningful traction. In addition, the 4-hour chart oscillator has not yet fully rebounded from the bearish zone, and bullish traders should remain cautious before betting on further gains. Therefore, any subsequent payments are more likely to face a strong resistance near the 0.7390 area where the 23.6% Fibonacci retracement level is located. The 0.7400 marks follow it. If it breaks decisively, it will pave the way for a breakthrough of 0.7450 and another test of the monthly highs near the 0.7478 area. On the other hand, the confluence support level of 0.7336 should continue to limit the immediate downside of the exchange rate. Some follow-up selling may drag the exchange rate down further to test below 0.7300 or the 50% Fibonacci retracement level. If it falls below the above support level, it will be a new trigger for bearish traders. After that, the Australian dollar against the US dollar may accelerate its decline to the support levels of 0.7250 and 0.7230-25, and eventually fall to the integer mark of 0.7200. The downtrend will further extend to the horizontal support level of 0.7170-65. If it falls below this level, the bears may be committed to retesting the annual low near the 0.7100 marks.

- OIL: Oil prices continued the good trend of the previous trading day, rising from the $67.50 area, and gained some follow-up traction on Monday, as demand is expected to rise. In addition, concerns about the slow recovery of supplies in the Gulf of Mexico after Hurricane Ida caused supply disruptions have provided additional support for crude oil. However, concerns about the rapidly spreading delta variant may limit its gains. On the other hand, the U.S. dollar is supported by market expectations that the Fed will begin to reduce its stimulus measures during the epidemic period soon rather than later. The U.S. Producer Price Index (PPI) released on Friday further exacerbated this speculation. The index set the most significant increase since November 2010, indicating that inflation may continue for some time. In turn, this may continue to drive the U.S. dollar.

The pound against the US dollar rebounded more than 40 points from the 1.3800 downside zone and climbed to the top of its daily trading range around 1.3835 in the North American market. The risky impulse of the stock market and the mild correction of U.S. Treasury yields inhibited the dollar's intraday rise as a safe-haven currency, which had previously risen to a two-week high. This, in turn, is seen as a critical factor in supporting entry into the North American market. Even so, the expectation that the Fed will soon announce a reduction in debt purchases should continue to drive the dollar and restrict any meaningful upside into the North American market. This makes it prudent to wait for some follow-up buying before going up further. From a technical point of view, the recent rebound from the 1.3600 level is along an upward sloping channel. However, the bulls have been working hard to take advantage of this trend and have repeatedly failed to break through the 1.3900 marks, which should become a critical turning point for the pound against the dollar. 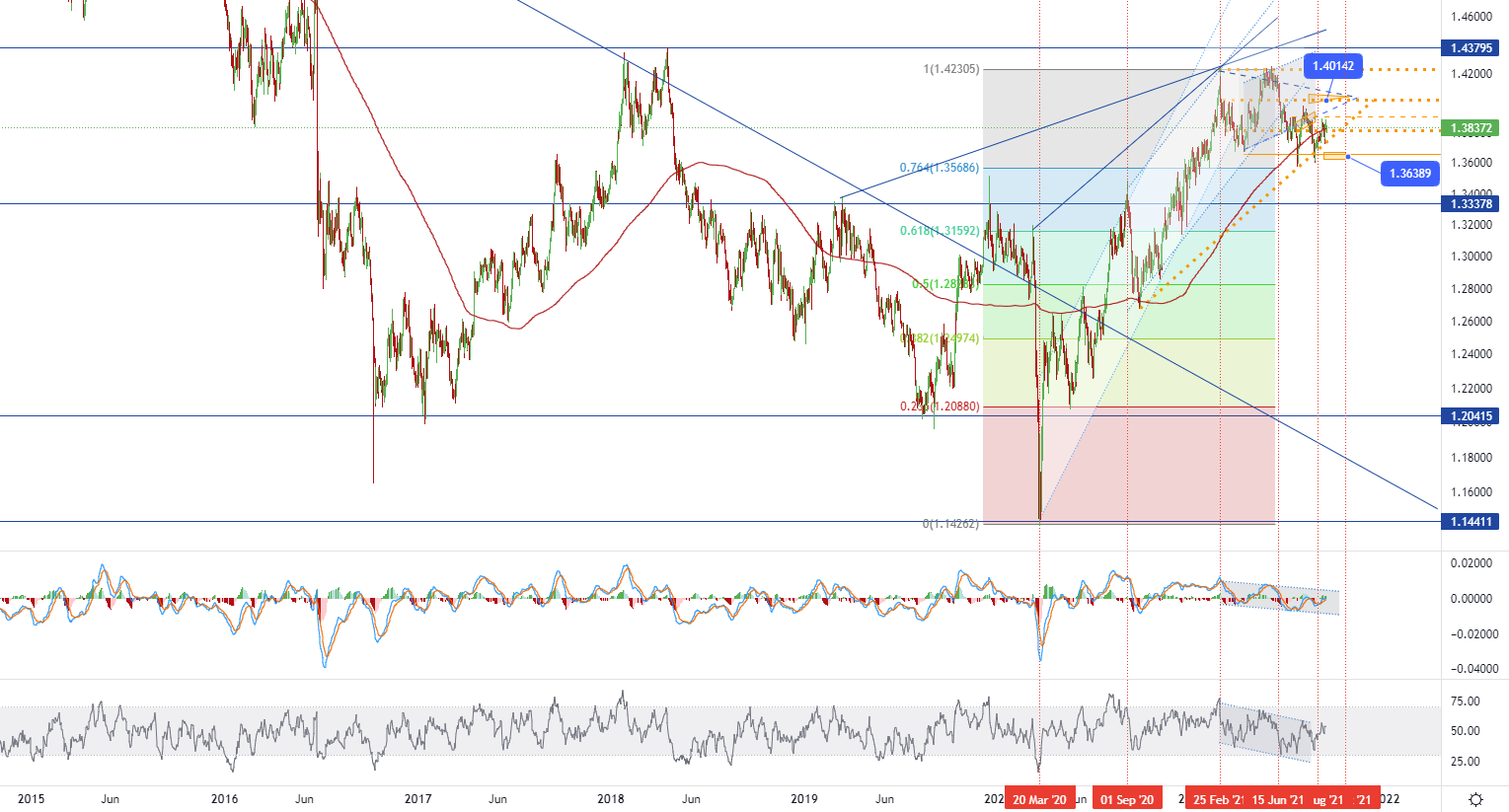 Disclaimer Important risk disclosure Privacy policy Terms and conditions Negative balance protection policy Conflict of interest policy GDPR and cookie policy MiFID client categorisation Deposit and withdrawal policy Online Trading Agreement
Risk Warning
CFDs are complex instruments and come with a high risk of losing money rapidly due to leverage. 84.7% of retail investor accounts lose money when trading CFDs with Blue Suisse Limited. You should consider whether you understand how CFDs work and whether you can afford to take the high risk of losing your money. Please read our Important Risk Disclosure.